I’ll get to the maths in a moment. I’ve been slightly hysterical, I think it’s the Arc effect.  Nonetheless I pulled myself together and battled high winds across the badlands of East Anglia to get to the Rowley Mile – two races late.

I arrived for the third, the Group 1 Sun Chariot and got to see the runners go down.

I slapped a bet on Ghanaati to win and Spacious each way as me and her go back a while now. Ghanaati looked like she might come to win around the Dip, but was in the end vanquished (somewhat cruelly as far as my pocket spoke on the matter). Things then looked up. I thought Spacious was 4th, but she was actually racing in the Cheveley Park 2nd string colours, and as she was 3rd  I did not lose on the race after all. This confusion was a result of my having not looked at a card at all and not being able to buy one either as I was so late. This unfortunate state of affairs continued throughout proceedings, despite my companion being an employee of the Racing Post and my trawling the bar for abandoned cards, ultimately lacking the balls to just swipe one from a silly drunk.

So it was paddock picks for me all the way in the Cambridgeshire. I hate big handicaps – did I say that? My companion and I had a conversation along the lines of:

Me “I like number 9, which horse is it?”
Him (who had been on time) “Supaseus. Actually my stalker, Hughie Morrison, is here (Supaseus’s trainer).”
“Is that a good sign?”
“I can’t remember”
“I thought the horse preferred some cut”
“Maybe, he may have been aimed at this and the ground is usually a bit softer”
“Hmmm. Remind me again which side had the advantage in the farcical race that I missed”
Him, still seething about the result “High”

So I backed 9, aged 6 and drawn 26 at an SP of 16/1, and it only went and won. Supaseus hit the front early, very early, more or less from the stalls. My mate pulled a face. I told him not to worry (not that he’d backed it) it can win over 10f – I don’t even know if this is true, but at the time I felt it to be incontrovertibly so. Woohoo. Well in front now, which was just as well as the lack of a racecard started to take its toll on me in the last few races. 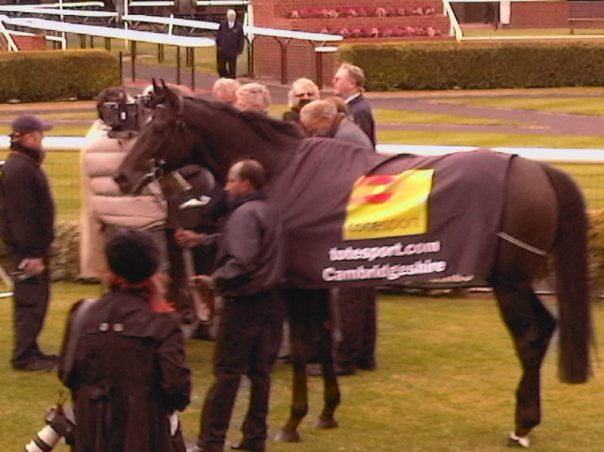 A bad quality shot of a quality winner

So now the numbers bit. Tomorrow Sea the Stars is miles ahead on any ratings known to man, woman or child. I have been through every possible negative I can think of and none are remotely credible. Ballydoyle are running three, two in the tag team before (they hope) Fame and Glory sweeps through. I am not convinced these tactics are going to work in such a big field. If they do by some chance, I am going to cry. Conduit has been aimed at this race but even with 2 more furlongs than they had in the Eclipse to get there (in front of StS) I don’t think he will. I could carry on trawling through the field with vague musings…

Youmzain. I am a big fan of his trainer Mick Channon, although I wouldn’t send any 2yo his way, and with Kieren Fallon on board (who we saw today) I am mindful of foxes and henhouses; but even with the visor and Mr Fox, Sea the Stars is no hen.

Cavalryman. Fabre trained. Respect, nuff said. and so it would go on. I don’t actually care too much who fills places. I don’t care about the race as a punting proposition; I only care that Sea The Stars and fate meet in perfect harmony.

So I have looked at the numbers and they all add up. Mick Kinane wins the Arc every 10 years – 1989, 1999… Sea The Stars on his 6th race of the campaign races from stall 6. His dam, Urban Sea, who died this year aged 20, won the Arc herself 16 years ago. Victory is written in the stars and I hope the heavens are reading the script.

Posted on October 3, 2009, in Horse racing and tagged Sea the Stars, Supaseus, The Arc de Triomphe, The Cambridgeshire. Bookmark the permalink. 3 Comments.