A week is a long time in politics. Last Friday my heart was breaking that the majority of good people in Scotland voted to maintain the status quo, proving the science on bias in decision making is nearly always right. My heart was breaking, and my mind was fuming as the Westminster elite, who had shamelessly manipulated the media discourse over the last couple of weeks of the Independence campaign, entirely for their own benefit (and not that of Scotland) immediately altered the conversation from one of further devolved Scottish powers to English votes for English MPs.

That long sentence shows that I still cannot speak of it, not really. Not without getting almost incandescent with fury and indignation about how easily the establishment continue to distract and manipulate the majority.

Anyway, now all the conversation is about air strikes in Iraq and whether they will be expanded to Syria. I have views on this, I am just not sure exactly what they are. I could not help but wonder how the wife of the captured hostage Alan Henning felt about the vote yesterday. My heart goes out to her, him, and their family and I hope his story turns out better than that of others. I just can’t understand man’s inhumanity to man. Do we learn nothing?

Coincidentally, this morning my daughter decided she wanted to draw ‘scary things’ and a quick google came up with some inspiration. She did this freehand whilst I was busy with the other child. It’s a pretty horrible image, and depicts, for me, the truly ugly side to some humans’ nature. Some people are just better at hiding it than others, I suppose. 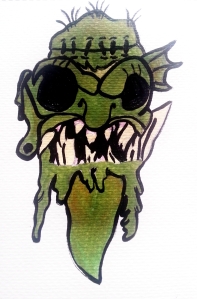