I never say I am gutted, but today I do, and I am. The news that the great Kauto Star is dead was like a blow to the solar plexus. My god, I loved that horse.

On wishes and horses

Fifteen people had already found their way to the blog today by typing in ‘Boxing Day wishes’, so I decided to make my own wish.

I dreamt about the King George last night, I was looking for Kauto Star’s colours coming up to the line at Kempton. It looked like a photofinish… 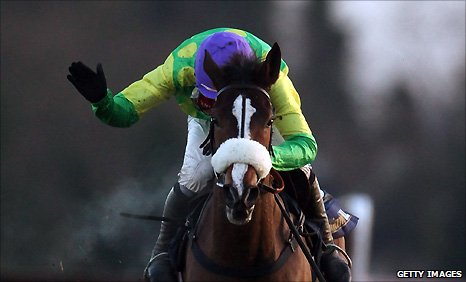 For what else is there to do whilst waiting on the world to change, just a little?

Sounding the Depths of the Being

A man taken out of his room and, almost without preparation or transition, placed on the heights of a great mountain range, would feel something like that: an unequalled insecurity, an abandonment to the nameless, would almost annihilate him. He would feel he was falling or think he was being catapulted out into space or exploded into a thousand pieces: what a colossal lie his brain would have to invent in order to catch up with and explain the situation of his senses. That is how all distances, all measures, change for the person who becomes solitary; many of these changes occur suddenly and then, as with the man on the mountaintop, unusual fantasies and strange feelings arise, which seem to grow out beyond all that is bearable.

I was going to open this post with a sentence something like: when Ed Miliband fell on his sword after the election, or when Ed Miliband was crushed under the weight of his toppled stone… However on reflection, it really wasn’t as dramatic as all that, was it? Ed resigned, went to the Cenotaph, had a grinning photocall in denim with his wife and kids, before hopping on an Easyjet flight to Ibiza with Justine presumably to drown his sorrows in the local sozzle hierbas (if not dance the night away at Manumission).

He may have been have been gutted, but he did not show it. He wasn’t mortally wounded either – popping up on the backbenches some time after the Queen’s Speech to talk about inequality. I’ve always liked Ed to some degree. Yes, he had some unfortunate moments, and yes the thing with his bro was a bit unseemly but still. Hell, I even learned to type his name right this year; hitherto I’d been smashing in an extra l somewhere in the middle of the Mili. I was however disappointed with the manner and timing of his exit. Far better to steer a noble course up until the summer Parliamentary recess having called a leadership election and not standing himself.

Better because it would have stemmed the tide of those Labour MPs and members jumping on the Our Manifesto Was Crap bandwagon days after apparently supporting wholeheartedly. Better because he could have carried on sticking it to the Tories whilst they embark on their early programme of vicious in-year cuts that no-one I know voted for. Better because it may have led to a different selection of Labour leader candidates.

I watched the leadership hustings from a church in Nuneaton on catch up last night. Going in, I was not sure what to expect. Coming out, I was mainly disappointed.

Andy Burnham. I had assumed he would be the one I would be most likely to vote for. However I am aware of his voting record on gay parenting rights and this marks him down for me. At the hustings I was disturbed by his use of the Tory phrase ‘get on’ and, I am shallow enough to say, his manicured eyebrows which put me in mind of a Thunderbird. On paper, I like his provenance. In reality, I need some convincing.

Liz Kendall. Just no. The Sun have backed her which hardly helps. Of the four candidates she was the one that sounded most like a Tory. She also spent too long during her opening gambit talking abour herself. It was meant to sound like she was a woman of the people, but to my ear it made her sound like a Tory from the Margaret Thatcher mould. She also corrected Andy B when he said ‘the party comes first’ to ‘the country comes first’. You’re not Churchill yet Liz. Definitely a closet Conservative – I think she even said ‘we must live within our means.’ Sounds rather like Osborne *shudder*

Jeremy Corbyn. Over 20 years ago I worked in Corbyn’s constituency. I was a member of the T&GWU but even so Corbyn had a reputation amongst even the trade unions as a bit of a red under the bed. Two decades later he has mellowed. He also talks the most sense from a humanistic point of view. Is our job to gently herd and tend capitalism, or is to nurture individuals and commmunities through decent basic services and equality of opportunity? Corbyn was the only MP from the contest to come and speak at the #LoveFE lobby I attended last week, so I was keen to hear what he said at the hustings. I think he came across well. There’s no point the Labour Party becoming Tory-lite and Corbyn’s input into the leadership contest gives us an alternative conversation, thank goodness.

Yvette Cooper. I have trouble with this candidate. She speaks well and I believe she has her head screwed on straight in terms of values and experience. Yet I have a problem with her being so embedded in previous Labour administrations, so I guess that’s my main prejudice. I don’t know what she could do to overcome that, but I do keep an open mind.

I don’t believe the central ground is where Labour need to be to win an election. I believe there are enough people who don’t believe in the straight selfish values of capitalism who would support a new vision for the country. I think Corbyn has started to articulate that best, but he needs to incorporate an alternative economic strategy to settle the horses.

Personally I am sorry that the following did not stand: Chuka Umunna, Dan Jarvis and possibly Tristam Hunt (despite his aspirational Waitrose statements post-election).

As things currently stand, it doesn’t feel like too much of a choice and I am not sure any of the candidates would present a credible figure to the electorate in 2020. I have a nasty feeling Labour might be entering their equivalent of the Howard/Hague & IDS Tory era.

I ventured into the loft today to bring down this large original for my daughter’s bedroom wall. It’s the kind of piece that isn’t fashionable these days, but I’ve always thought it had an interesting quality of atmosphere or (to borrow from Wassily Kandinsky) innerer klang even.

The ‘big horses’ as I called them as a child, were my absolute favourite way back when.

My heart still skips a beat when I see a proper carousel.

I went into a bookies for the first time in years today, to look at the card for the Derby.  I wanted to check for stamina in the winner’s damsire, but the Racing Post was firmly weighted down under the sharp elbows of a serious old gentleman who was holding forth around one of those plasticky tables they have in those joints, so I left without the information I wanted.

I am not so fond of the Derby that I am desperate to back a 13/8 winner, but I was certainly glad for the owner (Oppenheimer), trainer (Gosden) and jockey (Dettori) – particularly the former two who had decided it was worth supplementing the colt for the race.

I did not venture back into the bookies.  I am quite glad I didn’t too.  I would have backed the winner with my only fiver, and then tomorrow I would have had to traipse back to collect the small winnings.  I mean, who needs that kind of hassle on a Sunday.  Now, if I had backed the 50/1 Oaks winner on Friday, it would have been a different proposition altogether.

Would you ever wonder
Why you bothered to
Get out of bed
From a safe embrace
Into the cold world
Where everything that was done before
Needs doing over
And nothing has changed overnight
Until it does
But not in the way that you hoped for.