How Memory Does or Does Not Work: Peter O’Sullevan

Peter O’Sullevan died yesterday.  For many, many years he was the voice of horseracing and because when I grew up all there was on the television on Saturday was football, or racing, or wrestling, he was part of my childhood albeit in a background, subliminal way.

I’ve checked the many, many years timespan and he commentated for the BBC for 50 years.  50 years!  But of course O’Sullevan himself would have probaly said the former: 50 years, minus the exclamation mark because he was that kind of a man and exclamation points were probably only worth breaking out for the likes of Red Rum in the National who he called home on three separate occasions.

I met Peter O’Sullevan once.  He was under an open-fronted tent at Cheltenham, sitting down, perhaps signing books.  There wasn’t a queue especially.  I don’t remember which occasion it was at Cheltenham – I have only been twice and neither were to the Festival.  It was either November, a mid-week meeting where I had a small racing club interest in a horse called Saucy Night, or it was some years later at the meeting held every year at the end of January.  This is the first of my memory glitches.  The second is who put whose hand on whose.  I stopped to say something to him and he seemed old, frail even.  It was a cold day.  I don’t remember what I said, but I remember his response was warm and my hand went over his hand, or vice versa.

It seems an odd thing to have happened, even now.  I am not inclined to touch people I know, let alone those I don’t, and yet my memory is that the moment I shared with Peter O’Sullevan was genuine and heartfelt.

Hands tell their own story.  It’s a shame I can’t quite articulate this one in words.  Or maybe it’s not – memories are made up of more than that, after all.

The Problems with the Parliamentary Labour Party

My fingers have been hovering over the keyboard for nearly a week about this post because I don’t quite know what to make of it all.  Last night I remembered the Isaac Asimov quote – that writing was thinking through his fingers – so here goes.  Not quite sure what will come out…

Come on Labour Party.  Stop playing this out in public.  Stop making idiots of yourselves on air and in the House trying to be smart and clever and (some of you) downright rude to Mr Corbyn.  Put up or shut up until September.  The fact is not one of you will be leading us into the next election – whoever is elected you will be in the caretaker seat for now – and that’s the only outcome I would be inclined to back at the moment.

Dwarf variety I think, spied in a local park. It’s not quite Provence yet Toto, is it though?

Nevertheless it is a Small Thing, noticed. And this way wellbeing lies.

I took the eldest daughter to Wembley last night to see the ginger-headed one – the best bit I felt was when he referenced his Irish roots (and my Scottish ones) by singing The Parting Glass acapella.  The rest, well, it wasn’t altogether my cup of tea, but there’s no knocking the lad’s intent, his passion and the overall workrate.  And he’s only 24.

His set was just over 2 hours long, alone with his guitars, and without a break.  He held the audience’s attention, although my own mind wandered from time to time.  I took a few photos – as did thousands of others.

We spent the night high up in the gods and, looking down, as the sun set, I was reminded of nothing more than Ai Weiwei’s Sunflower Seeds that made me so angry some years back in the Tate Modern’s Turbine Hall. That was a blog post that never got written, and never will, now. 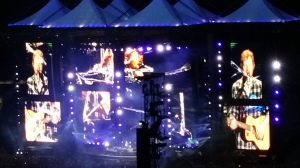 Goodnight and joy be with you all

Leads to poetry. As does life. Here’s one I wrote earlier, about both.

The website that published the piece is the simple but wonderfully executed Visual Verse – one image, one hour and write.

I have northern hands. They are my grandfather’s on my mother’s side: squared off, sturdy, safe?

I see my grandad spinning a knife on the polished dining table after tea – the bone handle spinning, silver plated SHEFFIELD slowing, slowing, ready to point out the person who would be doing the washing up.

My grandad always did the washing up. And peeled the vegetables.

I do the same, but I don’t spin a knife.

I have his hands and they are northern, Lancashire hands, worn in with the good earth and the pit dust of somewhere like Newton-in-Makerfield. I have the hands that he was yet to grow into as a boy, walking through the Queensway Tunnel under the River Mersey with an uncle the night before it opened in the summer of 1934. I have the hands that dovetailed joints and played ludo and grew vegetables and wrote a PhD about the infinity of numbers. I have those hands, and the stories that lie in them, and I’m grateful.

My mother has them too.

Posted in Art, Be not idle, Bedtime Story