I took this earlier this year in Chicago. I can’t think why I didn’t post it before now.

What with the huge Picasso sculpture a few blocks away, the Windy City really knows how to rock its public art. 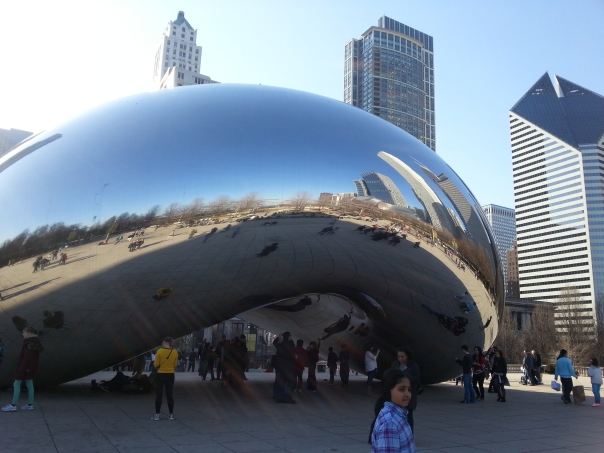 I could talk about the engineering of the rail transport in Chicago: how some of it is elevated and some of it is subterranean. How underground you could be anywhere, how above ground you can only be where you are. I am not going to talk about it though, because there’s nothing to say, not really.

I could mention how the weathered wooden platforms on the elevated sections remind me of Baltimore by Nina Simone and how I am always afflicted with a desire to photo the treads and risers on the staircases, both here and abroad. I could mention those things, but it might make me seem weird, so I won’t.

Public transport by train makes me think about my Grandpa and the red Central line on the London Underground. It makes me think of being gently rattled out of Leyton, after waiting for a train for Epping, or a journey in the opposite direction, Going Underground at Stratford on the way to Bethnal Green.

In Chicago you can go to Harlem and California on the Blue Line; in London, Mile End and Holborn on the Red. Both lines intersect with those of a different colour, travelling in different directions. In London I spoke to Americans returning to Atlanta, in Chicago I spoke to a black man about Marcus Garvey; all of them strangers, me the most. Taking a city train is a meditation, with some psychedelia thrown in, when you open your eyes.

Or maybe that’s just me. Like I said, I could talk about it, but I won’t.

God only knows how but I managed to return the car, code name Sox, on time to downtown Chicago this morning with: a full tank. This was entirely serendipitous; at least that’s what I am choosing to call my misplaced driving round the mean streets during which I happened upon a gas station. See, how I can now speak Yankee Doodle Dandy…

I left north Michigan this morning at 6. It was freezing with a bulging crescent moon and a clear starry sky to rival those night skies I have seen over Devon. I had about 4 hours sleep so when I started up the car it was with a sense of anxiety, not helped by AC/DC singing a Highway to Hell as my travelling overture.

You get an extra hour driving west and I needed it, dropping the car off at just after 11 am, a putative four hour trip having taken me six. My ability to travel slowly even when seemingly driving fast never ceases to confound me. Or others, I suspect.

Anyway I dropped off Sox in the subterranean car park and wished him well. I hope he makes it back to his Rocky Mountain home state some day.

Since we parted ways I’ve been waiting. I spent an hour like a pan handler on a street corner downtown; suddenly the adventure, the emotions, the fatigue and the sheer weight of my literal load did for me.

I sat in a shaft of sun between two skyscrapers and got my head together. I ate a turkey pastrami sandwich on rye that had been packed for me and sorted through my rubbish to lighten my luggage. For that hour it felt like that was my corner of this vast continent. I am glad to be going home but sad to leave. I’m frustrated I didn’t get time to go to Detroit, or Mackinac Island; that I haven’t seen the cherry trees in blossom or the ice melted on the lake. Perhaps another time. For now this is my spot in the world and it just about encapsulates how I feel.

*This post was composed in a coffee shop, still waiting. I also put in a shift waiting on a railway platform in the sunshine. I was waiting for the hostel to open @ 3 – which it has.

The waiting is over.

Posted in Be not idle, Photography

I left home just before 7 a.m. yesterday morning and finally arrived in Chicago last night at around 9.00 p.m. local time. I had acquired a deaf right ear and a banging migraine behind the right eye along the way but after 19 hours travelling I am here so all is good. Now it’s 7.30 here and I have left my dorm mates (a French girl, a German girl and an unknown) snoring gently in the hottest bedroom in the known universe which seems to smell of stale alcohol this morning… For once, not mine.

I had to take two planes yesterday. A giant one for the transatlantic leg to Ottowa, where I was right in the middle of the middle section, next to a man from the Village People on my right who shared his white wine with me and a Canadian lady on my left, who (selfishly I thought!) did not. The second plane was a little one, very narrow. It only sits two and then one either side of the aisle. I was in the single seat but despite feeling a bit concerned, the pilot was chatty and gave us prior information about bumpiness, which I decided helps. In the event, it was not too bad at all, and I can recommend a phobia hypnotherapist in Southend-On-Sea, should anyone need one. I can also report that Chicago O’Hare airport is a piece of work. We came into land on a northern runway – planes of a similar (small) size were just queuing up behind us with one landing every minute or two. At one point I thought a jumbo was headed right for us as we made our descent over Lake Michigan, but they have their own runway, fortunately. The airport is massive and hugely busy. Still it’s nice; it smells of popcorn and they have some art projects showcased with local kids. Seems like they certainly know how to do an airport here in Illinois. I could have taken loads of photos yesterday once airport side, but as I could hardly stand up, or see straight I didn’t 🙂 Because of my taking a connecting flight in Ottowa, I was able to clear US customs and immigration there, a nice quiet Canadian airport surrounded by piles of dirty snow. US immigration always put me on my mettle, they seem so cross. Anyway, despite my feeling they might put me right back on a plane to the UK, they have let me in, but not before a lot of questions, fingerprinting and a photograph.

The train from O’Hare is interesting. They tell you off for something you might do after every station stop. No eating, gambling, littering, putting luggage on seats and plenty of other mini travelling crimes that as I had never thought of before, I seem to have now forgotten. Anyway, I can feel that this is gently rambling, so I will end it here. I feel like I am still moving – this happens to me after a long trip and I am sure it will settle in a day or so. The deaf ear I can do without. It makes me seem like even more of an old dear than I already do in this hostel filled with youngsters.

Sorry, for any typos, I feel like I am typing on the poop deck in a gale, so re-reading is out of the question. Also, no pictures as I am doing this on a hostel computer. Same language, separated by a different keyboard. Keep getting a \ instead of a

In the first two months of 2013, 57 people have been shot and killed in the South Side of Chicago alone. Tragically, the latest victim was a 6 month old baby girl.

Earlier this week, also in Illinois, in a place called Waterloo, a 43 year old golfer was instantly swallowed up by a sinkhole 18 feet deep. Fortunately, and unlike the unfortunate man who recently met the same fate and disappeared in his bed in Florida, the golfer survived with just a dislocated shoulder.

Then last week I read about the massive snow dump that closed Chicago’s O’Hare airport. That’s the one I’ll be flying into in two weeks time.

This all makes excellent reading for your stress levels when you are flying into the city in two week’s time. Did I say TWO WEEK’S TIME?

I think I need to make an appointment at the GP for some valium. Sadly, I am not joking.

Looks pretty, if a bit wonky, but what lies beneath?