Gogos GoneGone (I hope it’s not an omen)

We had a bit of a England Football Team Gogo purchasing frenzy at the weekend.  Something to do with my minor obsession with getting a Theo Walcott Gogo.  We still haven’t found Walcott, or Cappello, which might be just as well in the case of the latter.

Anyway, I lined them up to see if we had enough to start today against Slovenia, and this was what we had. 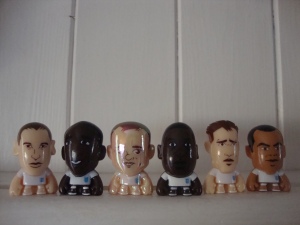 So I drafted in a few extra to make up the numbers and inject some footballing grey matter and searing pace down the left wing.  The Angel With The Chipped Wing just angled into shot on its own account. 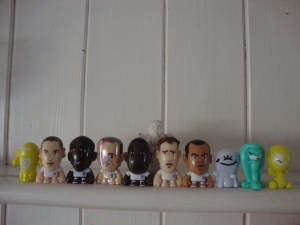 The turqoise one for a hat trick

It’s as well I took the shot at the weekend.  CJ the Gogo manager, despite sleeping with them and bringing them with her in her marble bag into my bed too, gave them all away bar Heskeyon a free transfer at school yesterday 😦  She has learned nothing from the Crouch/Rooney debacle it seems.

Fair enough, I’ve been having my biltong with Fabio, but when the chips are down (like this afternoon) I am right behind the team and as the Manager has finally admitted to “perhaps” having made some “mistakes” I am feeling a bit more optimistic.

I just used it in a text about England’s manager.

Stubborn and wrong: there ain’t no worse combination in the world.

It’s all in the pedigree, whether it’s a maiden at Kempton, or a match in Cape Town. The lads are crushed under the strict regime. It’s like a relationship that doesn’t work when push comes to shove.

Warming to my theme

Disclaimer: This is going to be a bit random, but the England manager idee fixe has raised it’s ugly head again. Better I bore cyberspace with it than my nearest and dearest.

I had to buy a cheap paper today. The kids needed £2.10 per head and that is a most awkward sum if you only have a fiver. So I bought the Sun. *Hangs head in shame*

Murdoch’s henchmen lured me into this heinous crime with these backpage headlines:

So despite my sister’s, mine and Bob Wilson’s best advice, if we are to believe the Sun, Fabio will continue with his perverse policy of naming the starting line-up 2 hours before kick off.

Ok we all know he has only limited resources, he’s not going to shock us with a “Peter Shilton in Goal” headline but Cappello’s stubborn insistence that this method has served him well throughout his career is missing the point (my point, my wagon, don’t forget!).

He has only managed Latino sides at club level. Salaried players who will want their place in the team, but are probably never in doubt that they will start anyway so robust tends to be their self-belief, and who can always enjoy a balmy night off if the worst comes to the worst.

Fabio does not feel the weight of expectation that his players do, because he has the same Latin ego as his former inmates. Our lads are desperate to play and desperate to play well. In those hours leading up to kick-off they will want to start more than they are able to hear what his match plans for the team are. And that will go double for the goalkeepers. I am sure keeping the Italian Stallions on their ponio toesio competing for their places until the last minute worked quite nicely at club level, but English men are not cut from the same cloth. It’s not a worse or necessarily better cloth, it’s just different and Fabio’s hacking into them with a pair of pinking shears is not doing them much good.