I must see this film (National Gallery by Frederick Wiseman) for all sorts of reasons.

Way back when I moved to London, I spent many hours at the National Gallery.  Certain paintings became friends.  They still are.  I don’t call them, or write them, or send them gifts, but they are fixed in my heart.

Maybe that’s why I once I dreamed of a long conversation in an art gallery.  I half-started it once and it may have been the most important almost conversation of my life.  I have some slight hope that this film may be the final word on the matter, and then I can wake up.

On the other hand,  it may just be a nightmare, if the Guardian review is to be believed.

God it’s boring. I love the National Gallery and I was squirming in my seat. Why doesn’t Wiseman let the paintings speak for themselves? Again and again, he films audiences listening to curators or guides give lectures about the National Gallery’s works of art. One such talk would make sense in a portrait of the museum. But why repeat the exercise, again and again – and again?

Time Out critic’s conclusion ‘The film’s bold, brilliant climax’ sounds better to me.

I rarely watch films, which is shameful really.  Partly it’s because no-one else shares my taste – except for Fantastic Mr Fox by Wes Anderson which we all agree is everything a film should be.   I have a penchant for French films, not to be pretentious, but because they are pretty slow and have subtitles which means I can follow and hear what’s being said (by reading).  Major motion pictures just have too much going on for me.  The last one I went to see in an actual cinema was Spielberg’s Lincoln, which I really enjoyed.  Perhaps a little too much as the friend I was with had to nudge me sharply when the scene involved the Congressional vote on the Thirteenth Amendment to remind me I was not actually in the House of Congress in January 1865.  Lincoln was slow and and revolved around one central issue.  Slow is good.

I took this to a whole new level recently by watching The Turin Horse.  It’s the last film by Béla Tarr, a Hungarian director.  He says it’s the last, not me.  Anyway, having watched the last film I can see why he might say that – it may be because there’s nothing left to say.  I don’t know much at all about film-making but even I can tell when there’s hardly any dialogue (thankfully subtitled) and the takes linger on and on and on.  This is a marvellous and good thing as far as I am concerned.  When the shot is long, I get time to think.  Think about the film, what it all means.  See the different textures and expressions and wonder what it all means a bit more.  And I get to feel the film in real time.  Not in the buzz of a Hollywood-ending glow, but moment by moment as the art of cinema is pared back to it’s very bones.

I loved The Turin Horse.  I loved the opening premise – that when the philosopher Friedrich Nietzsche suffered his catastrophic mental breakdown it was provoked after throwing his arms around a horse that was being whipped in Turin.  This leads the film’s narrator to point out at the beginning that, ‘no-one knows what happened to the horse…’  As the ‘action’ unfolds over six days I loved the repetition, the long camera and the different angles on the same thing, watching them eat their single boiled potato every day;  I even loved the music which is essentially six notes in three bars of three.  The story is not uplifting certainly, but the experience, curiously, is.  I don’t understand how exactly, but that’s part of the magnetism.  Here’s the trailer.  If you can’t cope with that, then the full version is probably not for you.

As for the second film, I’ll fill you in on that next.

Can it be Gate IV already?

Or how to kill your blog in just five days.

I thought I’d double-check with myself that I am not taking liberties with the admittedly fragile concept, but no – so far every photo has fulfilled the criteria for gate, the definition of which I have ‘helpfully’ posted beneath to save confusion, plus that of door.

Gate (noun)  A hinged barrier used to close an opening in a wall, fence, or hedge

Door (also a noun) A hinged, sliding, or revolving barrier at the entrance to a building, room, or vehicle, or in the framework of a cupboard

I am beginning to think I might have quite lost it.  If I were to take up a recumbent position on the psychoanalyst’s couch they would have a field day with me.  That is such an awful pun that really do think I have lost it.  Perhaps it lies on the other side of these gates.

Today’s post is not really a gate, but it’s not a door either.  Still it’s got a Portugese cat in it, so you can’t complain.  There were kittens hiding in the shadows.  I saw one white and silver tabby one that was momentarily brave enough to poke its nose round the broken shaft of wood before disappearing once more.

All these gates?  It strikes me that, rather like the coffee machine in the song Calling You from the film Baghdad Cafe, they also need some fixing… 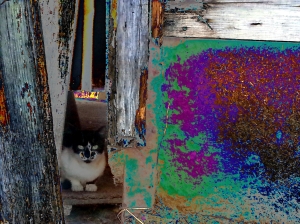 This is by a Hungarian animator Mendrei Miklos. It’s perfect for people like me (hard of hearing, half asleep, big tv too damn far away, attention span of a gnat etc.).

I do like a bit of Pingu too, did I mention that…