I don’t suffer from this as a rule, preferring to see things as they really are. A counsellor once told me that people who are able to reach for the rose-tinted spectacles, people who are unrealistically optimistic, have basically got a protective shield around them that helps them to cope with the vagaries (and worse) of the world.

Life is interesting; ‘may you live in interesting times’ being more of a curse than a blessing. Today has been interesting too. I am conscious that even the most committed rose-tinted spectacle wearer might have struggled with getting up this morning to multiple stomach upsets (via the dog) on the rug in the front room and on the staircase carpets. Or the early call to cover a class when I had children to drop off (via the car) and a meeting to take at the same time.

Or the necessity of still travelling, via the car, with the heaters on 32 degree heat, full blast because the question whether to save or scrap the car is too vexatious. Or the meeting summary that morphed into a 1500 word report that I wasn’t expecting to have to do today. Or the threat of bailiffs next week and the mix up about the university library fines I swear I paid. Or the two car parking tickets that are probably in the post.

I didn’t reach for my sun-tinted spectacles though. Instead I took the rug out into the garden and employed some washing up liquid and my watering can. And later on I did some cleaning up the stairs. The rest can wait. I found myself saying to someone earlier this week, ‘Well, it’s not the things that happen to you that are the problem, it’s how you respond that matters’. If someone punched me on the nose for saying such a thing, well I’d understand. It might be fair enough. It would be how I responded that mattered more than the punch. Wouldn’t it?

Sometimes, when I think things like this I wonder if I am becoming somewhat certifiable. Don’t mention this to my mother. 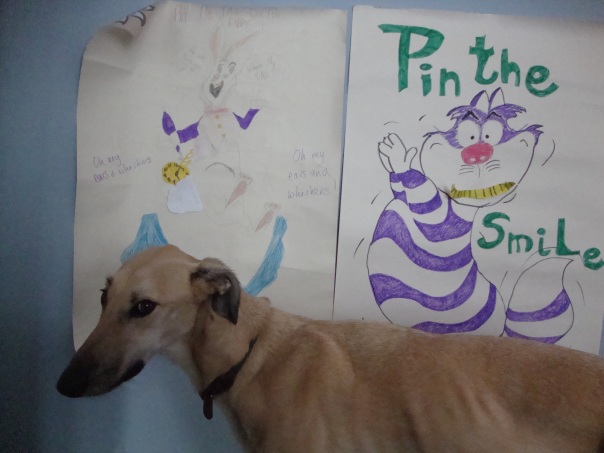 Nb The dog is fed three times a day, but he still has the figure of the waif and stray that he was. Eat your heart out!