I have nicked the title for today’s outburst from Daftbugger’s comment yesterday.

He makes the point that it is all Labour’s fault and it’s true that in just a year in charge not even David Cameron and George Osborne can be blamed for everything that’s gone on: Hackgate, England riots and the state of the weather. The world we live in has been changed by the government, but so far it is more in the order of a vicious pruning of the shrubbery than a total re-landscaping of the back garden. And of course it is true to say that people that smash shop windows and nick tvs are probably not overly-concerned with the finer detail of what the government cuts mean.

That’s not to say the wind has not blown cold and hard through society though since Cameron moved in. I think things have changed and even without a grasp of the finer detail of the political backdrop you can sense the change in mood on the street. Morals are tough taskmasters; I wonder what happened Cameron’s pre-election plea to ‘hug a hoodie’…

Yesterday Cameron continued with the rhetoric wherein we were assured that he knew what he was about: fighting back against those people, the immoral, protecting us ordinary people from the sick people in society. ‘Sick’ was an interesting phrase. For a start young people use it to mean good, better than good. Secondly, there is the mental health connotation. Thirdly, don’t sick people need treatment?

In trying to impress meaning and his own values on what appears to be a largely meaningless, inner-city existence, Cameron has shown that he cannot start a dialogue with those that should demand it but don’t know how, and has nothing useful to add beyond the reactionary: more police, swift justice, 24 hour court sessions, send them to jail. It’s a short trip from Hug a Hoodie to Off with their Heads.

Everything David Cameron says gets on my nerves. Of course his role is one of authority, so how can he not sound authoritarian when he is talking about the need to deal with sections of the community who are clearly damaging property and lives and, in some horrific cases, killing people. But the broad brush approach of lumping everybody in to the ‘sick’ category shows a real lack of understanding of what it is to exist as, say, a young person on an estate like the Pembury in Hackney.

I lived in Hackney for 15 years. I lived in 7 flats, 3 of them were council estates and one of those was a squat on the 15th floor. I had removed to the squat with the then boyfriend because there was an ongoing situation with the neighbour that defied logic, reason or resolution, despite there being injunctions issued against the neighbours to protect life, limb and property. This didn’t stop my car having its front and rear windscreens stoved in, myself being confronted and attacked in the stairwell (the lift never worked), and the front door being defaced and kicked on a weekly basis.

My boyfriend was on the transfer list because of the neighbour. He was offered a flat in the Pembury Estate, Hackney Downs. We visited it, it was in a 1930s block, freshly decorated and clean and on the ground floor. He turned it down.

‘It’s on the Pembury innit’.

No-one, not even someone driven away from their own flat by violence and assault on property wanted to live on the Pembury. That was nearly 20 years ago. But some people do live on the Pembury, they have no choice. And there are worse places to live in London. These flats, that the councils now say they may evict troublemakers from, are not fit for human dwelling sometimes. Many of them are badly designed with flat roofs and pernicious mould (not just a bit of damp) is endemic. The contractors who work in these flats, nominally as decorators, are in fact now reduced to mould operatives who have to return time and time again to re-treat areas of mould.

One mother’s flat was visited to treat mould about two years ago, her flat was full of mould. There was an empty cot: her baby had just died from asthma-related complications. The operative returned this year: new baby, same cot, new mould.

This is not an excuse for bad behaviour, one hardly imagine that mother was out on the streets of Hackney looting on Monday night, but you can get a picture of the general hopelessness of some people’s existences on some of these estates. Imagine growing up there?

I’ve nearly forgotten to mention Nick Clegg. He was on the Radio 4 Today programme this morning. His conversation with the presenter, in sharp contrast to Cameron’s haughty rhetoric, was more measured. His words offered hope for a dialogue, albeit a future one, about the why of it all.

I have my own ideas about what’s needed, and it’s not a political position borne out of a rant about cuts. That being so, it will have to keep until another day.

We are all hoping London will be quiet tonight, but shops in Hackney, Mare Street have been closing early and battening down the hatches just in case. I am sure there will be many more elsewhere.

My particular interest is that my daughters are staying in Hackney with relatives, last night elsewhere near Leyton. My maternal alarm bells have been ringing for 24 hours now, but common sense says if they stay in the house they will be fine. Perhaps it will be no more noisy than a usual summer’s evening in Hackney…

I was noting how many times the word ‘unacceptable’ is being used by the authorities in relation to the London riots; I have now lost count. Their whole tone is too obvious, insulting to the rest of us who can work out the criminality and chaos on our own. We don’t want words, we want to see some action. Balls to the rewarding the criminals line you’ve been peddling Mr Mayor’s Office – your job is to be seen on the streets you are in charge of, with something more creative to say than lofty rhetoric.

There is a line in a book I have been reading by John Macquarrie – it is discussing the human need to have a basic minimum of things for an existence and then from that foundation a human might begin to realise the uniquely human challenge of self-determination, or indeed simply the self. Without the bare minimum humans are put in a constant state of need. Inversely with too much a human being no longer just has things, rather the things have them.

Too much, too little, they both can amount to the same stunting of humanity, most particularly when one is juxtaposed closely with the other. This is not an excuse for what has gone on on the streets of London, but it is a potent ingredient to throw into the bubbling pot of disenfranchised youth who hitherto no-one much cared about as long as they stuck to maiming and killing each other. 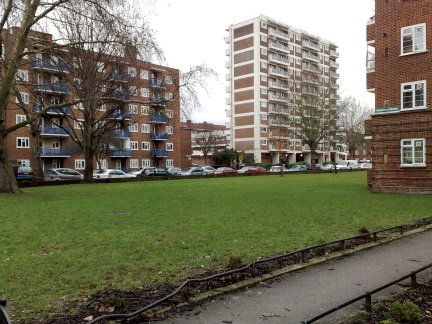 Tradescant House, Hackney - I used to live on the 8th floor, far left

Watching the unrest in Hackney on the television now it strikes me that the groups at the north and south end of Mare Street are in different gang territories: the Pembury and the London Fields. A young man I know told me this morning that his old ‘crew’ from Enfield had been touch yesterday telling to come to the hood and do some shopping. The other areas in London that have been affected will have similar gang problems. No-one is mentioning the gang word yet – too loaded and scary for a nice Tory government to address in the middle of the summer holidays. They need to wake up and admit to what is going on: the heart of London communities are being torn out by gangs and gangs step in to fill voids in society. I started the day with my head in hands, I’m going to end it that way.