Another car journey (and a Talking Head)

A car journey taken by someone else, who also wrote about it, also yesterday, as did I.

The difference between the two accounts was marked: one a sweet, contemplative meditation on the beauty of the landscapes and the art of the audio book, the other (mine) a supercharged rant about everything, really.  I can, I have, driven like the former writer, but these days that state seems like a different person to me.  Every journey becomes an epic in my mind and that, I suppose, is where the trouble lies.  For years, it has been a well-known fact that I have a tempestuous nature, something that has been oppressed, suppressed, medicated and subjugated, but here’s the thing, whatever is done to it: it won’t go away.

It will for a while which is fine, it leaves me to Get On, but sure enough eventually, like the many-headed Hydra, it rumbles into action leaving me trailing, dazed and confused, stumbling in its wake.  It is not, of itself, a bad thing.  It is the management of it that can be a full-time job.  It is like keeping a unruly dog on a tight lead (I have an unruly dog and that is probably a better analogy than a Hydra, but I know some who would err towards the monster), you cannot let down your guard.  I have learned, the hard way, do not loosen the leash.  And then there is the place between waking and consciousness where you have to and then, oh boy, does it come out to play.

I sleep but only by necessity and by forcing myself to ignore the unruly one’s many calls to action.  It whispers in my ear – do this, do that, not that, not this.  See this, here this one, this is THE thing.  Quick write notes, take this down, do not forget it, quick, quick, quick!  Last night it became convinced that each building has a sound (actually, I think that’s one worth thinking about) and it became specifically concerned with The Shard in London and the vibrational sound that it might have.  And then because it really is a Hydra, it became certain that there was a symphony of the the River Thames urbanscape waiting to be written, by me, at bedtime.  It really does take some convincing that this is not the time, nor the place, and maybe not even the right person to be telling.

The trouble is that some of the things it comes up with are interesting and drag me along.  This was how I discovered this piece by David Byrne, of Talking Heads.  It’s a South Bank soundscape, taking in some of the things that were preoccupying me last night and some that weren’t: Southwark Cathedral organ, Spitalfields market, for example.  He also has a project where he plays buildings; that’s not quite what my unruly beast had in mind, but I am going with it, for now.

A walk on Hackney Marshes

The current dog had never been to my old regular haunt on the Marsh. I rectified that by being accidentally in London today. It’s a long time ago that me and my old dogs used to walk, or run, with me there and a lot’s changed since then. A new car-park and new wooden-clad changing rooms. Over the White House Bridge, access to the East Marsh is now forbidden; it being carved up between Olympic Park needs and the relocation of the travellers’ site. The old travellers’ site closed when it was swallowed up, along with Waterden Lane, underneath the monoprint of one of the Olympic stadia.

In my mind, my dog Rudi was going to open up the throttle across the marsh. In reality, there were still a cacophony of football matches being played cheek-by-jowl. Each game was notable for the lack of spectators; all the noise came from the pitch. The only thing I could make out was an urgent ‘Carry on, carry on!’. The rest, I imagined, was in Turkish. I sent Fabrice Muamba positive thoughts; the London Chest Hospital that is treating him is only a few miles south of the Marshes. My own ancestor (a baker from Grays) died there in the last century. I hope that Fabrice will be alright, although his career will be over, which is a tragedy in itself. Because of the football, we skirted along the banks of the old River Lee. I was hoping to see a familiar sight: a comorant perched on a thick branch drying its wings. In the end, the final twitching list included: magpies, seagull, chaffinch (probably – even with glasses it’s hard to be definitive with my eyesight lately), mallards, ruddy or teal-type ducks (pretty anyway) and one dipping-in-flight green woodpecker. No cormorants.

How things change. Across the marsh the skyline has moved on. Still the Post Office or Telecom Tower and the Gherkin, now joined by the nearly finished Shard, that I photographed at closer quarters last year. It dwarfs the others, soaring well above the apex of its nearest rival, St Mary Axe. What hasn’t changed on the wide expanse of Hackney Marsh is the cold wind. Yet, the water looks dirtier, the industry heavier. Two new multi-coloured towers for private housing sit on the west bank of the canal part of the Lee. I remember the workers clocking on and off when the site housed the old Lesney Matchbox factory.

Opposite the old flat, more travellers have fetched up like a line of driftwood on the far edge of the cinder pitch. Children play outside the caravans. A dog sniffs where my own used to avidly hunt dead chicken bones. Back on the marsh two Orthodox Jewish men cycle by, chatting. It occurs to me that you never see an Orthodox Jewish woman on a bicycle. There is no-one else about. Where the capital city strains against the Olympic Park there is more space than where the hell I came from. I wonder about the wisdom of progress and walk back to the car carrying a piece of wood. No doubt I make a strange sight. I am used to this. This does not change.

The other thing that had not changed was the police helicopter having its regular Sunday whir over E9. How they afford it, I do not know. 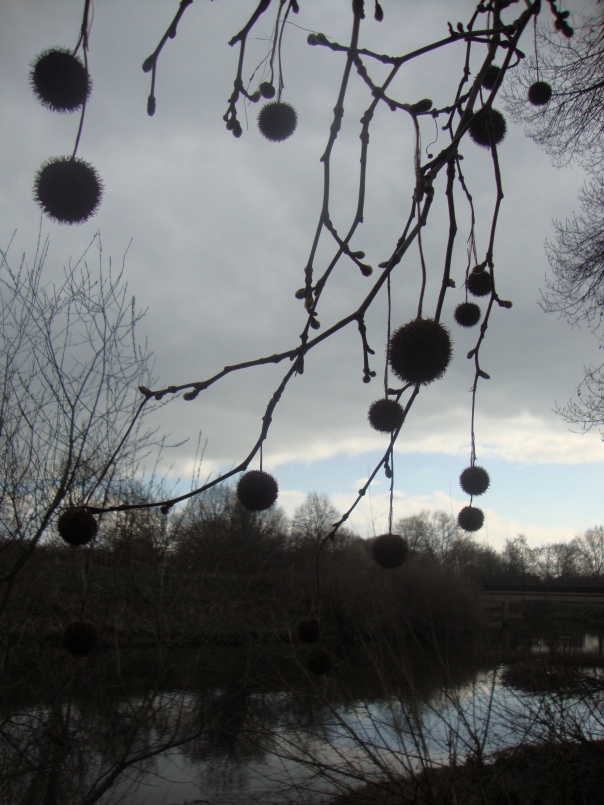 I was simply taken with the cranes and general construction activity and the two men working in a cradle about 100 feet up. It’s located on a very narrow street hemmed in by railway arches on the north side and Guy’s Hospital on the south; visionary indeed.