Getting my ear in

I am going a bit mutton, and it can sometimes lead to amusing results. The thing is, when you start to lose your hearing, you compensate a bit and you don’t really notice the creeping and cumulative effects. So when the screen is out on a till at the supermarket and you can’t read the numbers to tell you what you owe, you have to rely on what the cashier says. The cashier usually mumbles the required amount into their tabard and then you start to panic. You realise how reliant you have become on visual clues for what’s being said: the digital readout and *yikes* lip-reading. Yes, folks, you start to lip-read and you don’t even know it. That’s how clever the brain is…

The other thing you do without realising is you interpret what’s being said, and pass it through a sense and meaning filter. Then you rearrange what you heard, into something approximating a coherent sentence. You do this because quite often what you actually heard was nonsense… Again, like lip-reading, you don’t decide to do this, the brain starts helping you out of its own accord. And it does everything fairly quickly too. Granted, when I first became aware of the sense and meaning filter I would speak as if I were on some kind of time delay, but now, I’m pretty much in real time, mostly.

Which is all a fairly long preamble to the main point, which is this. Today I had a genial conversation with a colleague in silent cafe with no background noise. Therefore, there was less reason for me not to hear – background noise is my nemesis, so much so that I hardly bother to socialise any more because it’s far too much of a cognitive load. Anyway, my mind was a little off centre. This out-of-whackness was amplified because I was hungry – where I work manages to produce the most unappetising sandwiches in East Anglia (but that’s another story).

That’s my excuse for what happened next. My brain was limp, my ears giving their customary poor performance. The combination could be deadly. I was explaining how, as a child, all I longed for (prior to John Travolta in Grease) was a wall full of rosettes won by me and my imaginary horse. Then I explained how I was allergic to horses. I then clarified (and at this point I now realise my colleague’s ears may have started bleeding) that I did have my own horse once. I also felt it necessary to emphasise (goodness knows why) that the horse was a misfit. What I said next need not be shared, but it was about this point in my monologue that my colleague managed to squeeze a few words in edgeways.

“No I said, but sheep are very loud, haven’t you heard them?” I would then have, doubtless segued into an unashamed rant about a night I spent in Wales, quite pregnant and wide-awake on account of the sheep’s endless baa ing. Did you know sheep are nocturnal, I would have said.

Except, my colleague, brave and intrepid man that he is, pressed on.

Now, if my brain filter had been on, I would have realised straight off that my learned friend would have known that horses aren’t sheep, and furthermore that he wouldn’t feel the need to point it out…

Still, we’ve both worked one thing out today: an equine ain’t no ovine and I’ve had the added delight of figuring out that I really shouldn’t talk to people with only my ears flapping in the breeze and the handbrake off my brain.

We then moved on to discuss the children of the Rolling Stones, or was it the Avebury Standing Stones… but that wasn’t to do with being hard of hearing, that was a mere confusion of 1970s schemata.

Posted in Be not idle

Soul Catch Up & the Sit Spot

It’s been a ridiculously intense week; both here and so tragically around the world. It’s so much so that I’ve lost (or gained) a day already. Yesterday I was confused because I thought it was Tuesday, today I’ve been thinking it must be Wednesday. It was a jolt to the system to realise that the paid working week ends tomorrow and I feel like I’ve really not done any work at all.

Of course it looks like I’m busy and things have been done, hopefully as they should have been. But inside? No, no actual work has been done at all. I realise that I am at that point in my life where my purpose and my work are more and more enmeshed. Maybe that is what they call a vocation. It’s sounds horribly pompous; it’s not meant to. It’s actually more a source of confusion. How can I be so busy doing things that are in the diary, teaching, writing, trying to plan but not actually feeling like it’s work. Work, to me, is that thing you leave when you walk out of the door at that place called work. I suppose it’s partly a by-product of working out on the community, seeing your learners on the street, doing a lot of keyboard-based work after the school run, or before I leave the house in the morning. I suppose it’s because my interest is not confined to a professional one. People, how they tick, how they learn, the stories about their lives… is there anything more engaging? For me, it seems not.

Given that seems now to be the case, it is even more necessary to carve out time where I am not actively thinking which brings me to the title of the post. I was describing my recent experience on a street corner in Chicago, where I had to just sit for over an hour to get my life back together. I was explaining how in that hour, I experienced myself and the world in a very different way. She said that is like the story of the Aboriginal man who, after his first ever trip in a car, got out and sat on the ground. When asked what he was doing, he replied, ‘I am waiting for my soul to catch up.’

Now, after everything I’ve experienced, I get that. And I am sure there are many other people out there who do too. I also now get the idea that the self we create and come to know is deeply rooted in a sense of place. I learned by accident today that there is a name for that: embodied situated cognition. Of course, that is just a fancy name for things indigenous tribes practised long before we came along with our jargon. I know I am not describing anything new or controversial, I am just experiencing something ancient for myself. The sit spot is a place you pick out to go, out in your part of the world, in nature and go to sit and just be every day. Like meditation, or learning, this is not a passive process, or vegging out in the cabbage patch; it is an active intention to get to know every aspect of your sit spot in all the seasons, in all weathers. Which way the sun catches it, depending on the day. Whether lichen grows on the stones and where. The stones themselves, for they all have a name, even if you don’t speak their language. If there is water nearby, the songs it sings, drop by drop. Birds: resident and tourists. Insects, grass, flowers. The trees’ conversation through the leaves or the short snap of brittle branches. All of it and everything, under any circumstances.

The sit spot and the the soul catch up.

Off to find mine…

Turning into my mother

This is not a bad thing, just an observation. Practically speaking, I am doing similar things my mother used to do like:

Women can have it all, but is all of it worth having? Big question, *no brain left to answer attempt to answer it with.

In the interests of equality, tomorrow’s post will be called Turning into my father

*After I hit publish I realised this sentence had lost its way somewhat. Like I said, no brain left. My mother never wrote that kind of nonsense – that’s all my own work.

Posted in Be not idle

The corridors have been bare at work for months, but now the students are back and it is bustling and interesting once more. I don’t blog about work, because that would be wrong and it would be a whole new blog with anonymity for all concerned. However some things are ok because they are mere observations about passers by.

It seems a bit to me like the world of work disappearing partway up its own bottom. So when I walked past Officer Dibble this week near reception I was rather fixated on identifying his job role via his insignia (remember no specs for distance)… 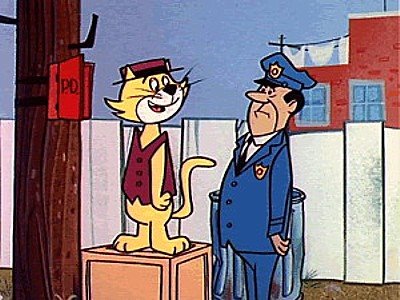 Can you guess what it is yet?

Posted in Be not idle, Cats